I have been to a lot of concerts over the years, but I have never witnessed an artist with as big of a smile as the one beamed across Shawn Mendes’ face during his opening song, ‘Lost In Japan.’ This expression of thrill and happiness carried on throughout the entirety of his show.

The joy on his face was incredibly authentic. His smile glowing. He looked like he was having the time of his life as he performed in front of a sold-out crowd of 53,000 screaming fans [give or take a few parents who were real-ones and brought their young children to the show].

When he shouted “Toronto” at the crowd for the first time I felt incredibly proud of him for achieving and living out this moment. He was also so sweet continually thanking the crowd, and reminding us how much he loves his fans. 💕

Shawn, a boy from Pickering, ON standing on stage in his hometown Toronto, at his first sold-out stadium show. What chills. What dedication. What honour. This was a result of years of hard-work, commitment, and passion that mixed perfectly with Shawn’s pure talent. He not only made the crowd swoon with his angelic vocals, but also as he ripped the cords on his guitar, and impressed with his piano skills. 😍

As a bonus, Shawn brought out his rumoured gf Camila Cabello and together they performed their steamy hit-song ‘Señorita.’ 💃🏽🔥

My best friend [who I also need to send a huge shout out to for the AMAZING tickets] and I both thought he was giving out some Freddie Mercery vibes. For the majority of the concert he was wearing a white tank top and exuding so much rock-star energy. He commanded the crowd and they answered with exuberant and passionate screams. 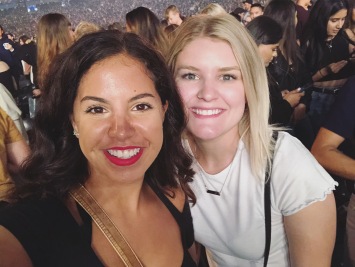 Overall this show was a night to remember. But don’t worry if you did not catch Shawn in action, there was a pretty hefty camera/video crew in attendance that night, so I’m almost certain that some sort of concert movie is in the works.

Hello! My goal for this blog is to self-empower and inspire at least one person each day. My posts are of passion, positivity, and inspiration! Follow my blog if you want to add some self-love, self-care, and self empowerment into your life!
-Liv